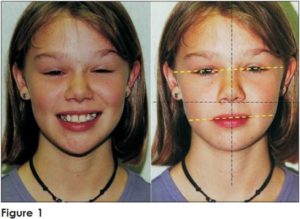 This female patient was seen at age 12 years, for routine dental examination. The chief dental features were the deep overbite, minor lower incisor crowding and insufficient space for the lower right canine. A panographic x-ray confirmed the loss of space in the lower right quadrant, the
presence of a rotated canine and an angulated unerupted second premolar.

On questioning the patient, she gave a history of jaw pain and lower back pain. Her parents were sufficiently concerned about the lower back problem to have consulted their family physician about it. Further questioning elicited a history of myofascial pain over the right vertical ramus, inability to lateralize the jaw, and poor motor control in excursive movements of the mandible. In addition to the oral symptoms, she complained of tinnitus and headaches. There was also occasional upper thoracic discomfort.

Although seemingly straightforward, from a dental perspective this case demonstrates that identifying asymmetry and/or facial imbalance is an important addition to diagnosis. The patient’s facial features (Fig.1) show that the eye level is elevated up to the left. 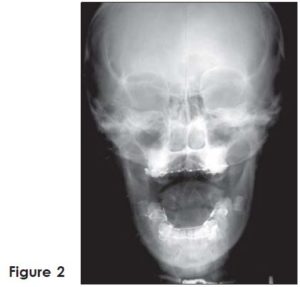 Facial distortion can be a clue to underlying cranial base distortion. The question is whether this is the case in this instance and if so, does it also have a bearing on the oral structures and oral function? Cranial strains are also commonly associated with temporomandibular disturbances such as are present in this patient. The history and the facial appearance indicated the need for a comprehensive examination with a broader perspective than just a dental one. 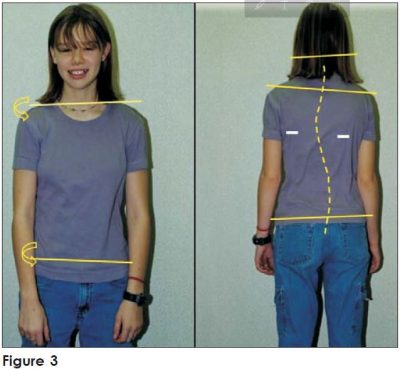 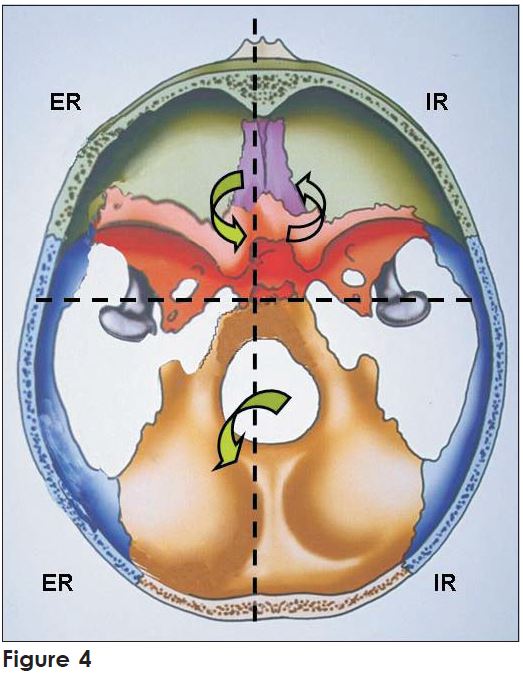 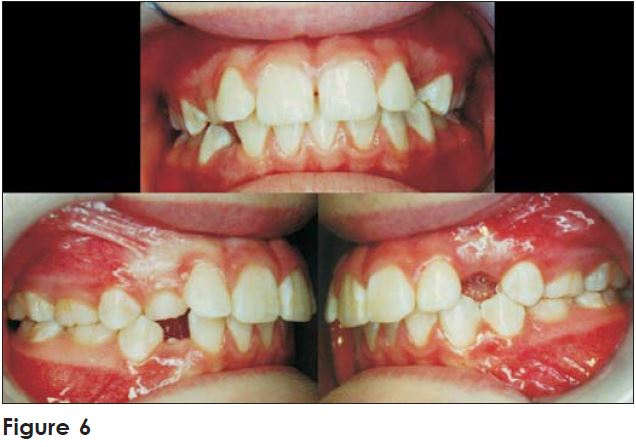 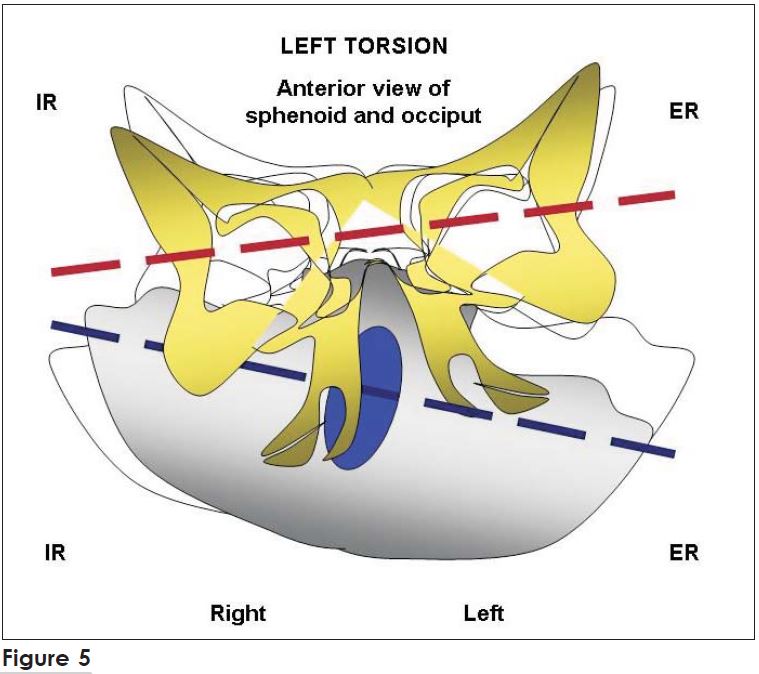 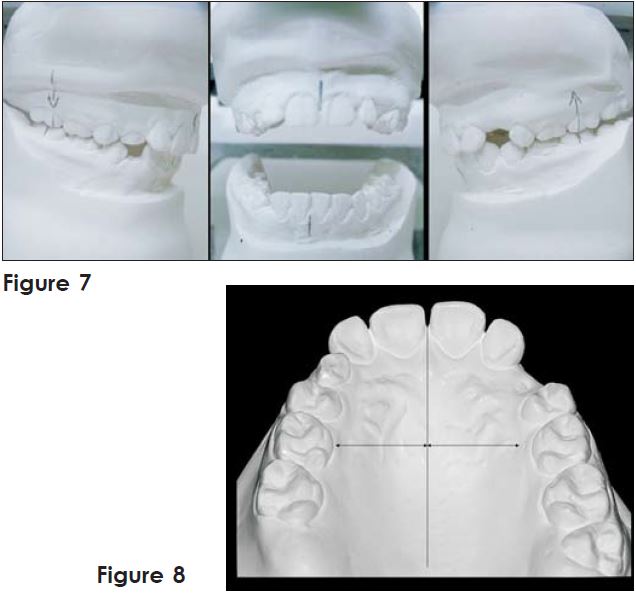 As was mentioned, the ocular plane and the lateral occlusal plane both are elevated on the left. This is a characteristic of the cranial strain known as a left torsion.1, 2 The p-a radiograph (Fig.2) shows that both the ocular and the occlusal plane run up to the left as
does the floor of the nose. The left gonial angle of the mandible is also elevated compared to the right angle. Therefore the radiograph seems to confirm that this is a left torsion.

An assessment of the patient’s posture by viewing the frontal and rear photographs (Fig.3) shows that the shoulders and the ileac bones of the pelvis are not level. The left ileac crest is lower than the right and the right shoulder is noticeably lower than the left, as is the right scapula. The right shoulder is also rotated forward. In the rear view, the occiput, together with the mastoid process, is lower on the left as demonstrated by the line
drawn across the posterior skull. The spine has a scoliotic curve. This is usually considered a compensatory adaptation for the discrepancy between
the levels of the occiput and the pelvis. 3, 4, 5

In a left torsion, the sphenoid rotates on an anteroposterior axis so that the left greater wing of the sphenoid is elevated while the right greater wing is
lowered (Figs. 4 and 5). This rotation carries the whole left half of the face upwards with it. 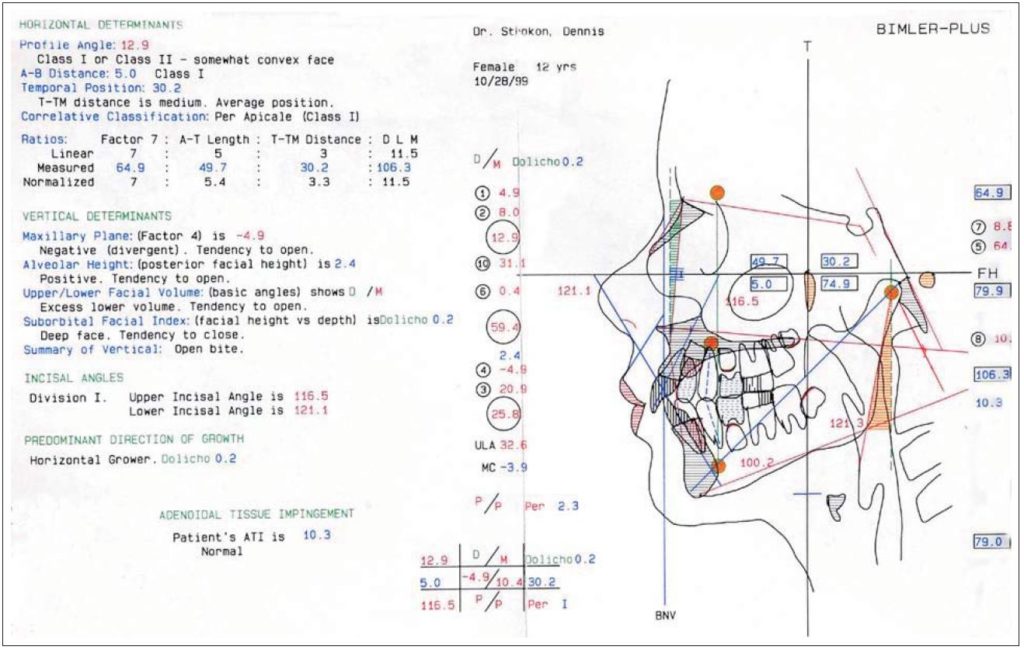 In the posterior half of the cranium, the torsion around the a-p axis has the opposite effect. The posterior base of the occiput rotates downward on the left as can be seen in Figures 4 and 5. The left temporal bone rotates externally in response to external rotation of the occiput. This external rotation of the temporal bone carries the glenoid fossa medial and upward on this same side. With displacement of the glenoid fossa upward, the mandibular condyle and with it the left ramus and mandibular teeth are elevated upward on the left.

Cranial torsion is a common strain. An osteopathic physician will normally identify torsion by cranial palpation. When it is mild or if it accompanies another strain such as a hyperflexion,6 the presence of a torsion can be missed. However, by including dental factors such as the lateral slope of the occlusion, articulatormounted models and a p-a radiograph, it becomes easier for the dentist to identify a torsion. This is important since the mouth and the dentition are directly affected by torsion.

The mandibular dental midline is off to the right due to early loss of the primary canine that caused a dental shift. Permanent teeth not erupted at the time of initial examination were 4, 6, 11, 13, 20, 27 and 29.

The residual primary teeth were extracted in preparation for treatment.

The tracing used for cephalometric analysis is Bimler (Fig. 9). Understandably, each reader is comfortable with his/her own choice of analysis so a
description of the patient’s skeletal form follows without referring to numerical values. The skeletal pattern as viewed on a lateral head xray
is mild Skeletal Class II. She is a skeletal Division 1 with respect to the maxilla in normal position relative to the cranial base. There is a skeletal open vertical dimension with a closed bite dentally. The lower incisors have a mild proclination. The cause of the Class II problem is mandibular size relative to the maxilla. The mandible flexes forward to compensate for its small dimension, creating the deep bite. The patient has the illusion of a more normal appearing facial profile because of the forward flexed mandible, but there is still a somewhat convex curve to the facial outline. The cervical spine has a normal curvature, however, the first cervical vertebra is brought forward due to forward rotation of the occiput. Maxillary incisor proclination is within normal range. 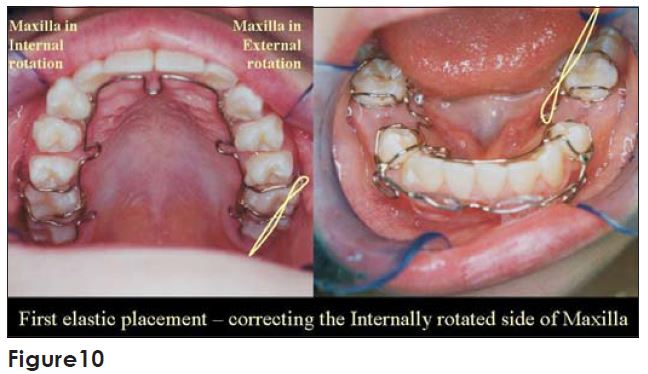 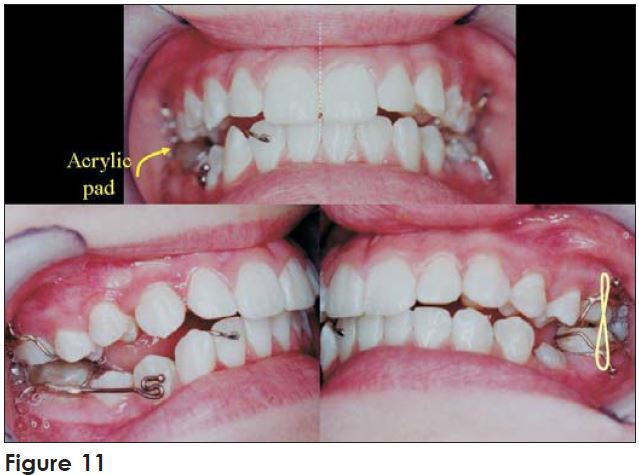 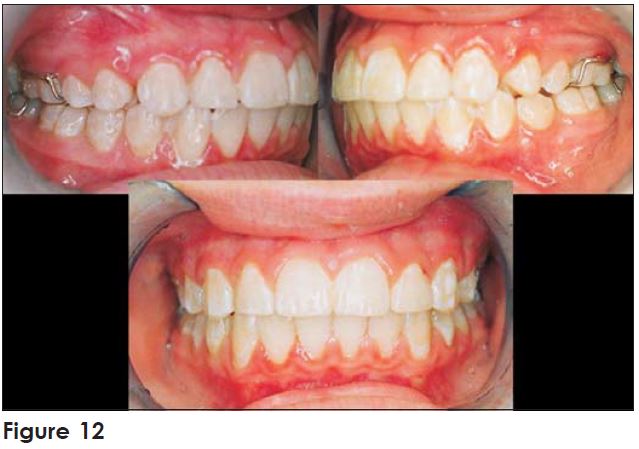 With the molar relationship in Class I, treatment for space regaining to accommodate the erupting canines and premolars would seem a logical initial
approach. Arch development, followed by conventional straight wire and Class II mechanics could solve the dental problem. However, considering the presence of the canted occlusal plane, facial distortion and patient’s symptoms, more comprehensive treatment designed to deal with the cranial structures was planned.

TREATMENT WITH THE A.L.F. APPLIANCE

Treatment was accomplished with A.L.F. appliances designed to treat each component of the cranial strain (Fig. 10). First, the premaxilla was freed to allow movement of the maxillary sutures. It is necessary to release the internally rotated side of the maxilla as an initial step. The first activation of the midline omega loop was followed by the use of a thru-the-bite elastic on the externally rotated side (left) while adjusting the A.L.F. to expand maxillary width (Fig. 10). This format will favor development of the internally rotated right side. The elastic acts as a brake for the left quadrant,
preventing it from moving buccally too much. The right quadrant then will move buccally because of the light activation of the ALF.

Other features of the appliance therapy included use of a lip-bumper on the lower A.L.F. (Fig. 10). In anticipation of increasing the lower arch inter-canine width to deal with anterior crowding, a lip bumper is used to maintain alveolar bone and preserve gingival attachment labial to lower incisors. By leaving the lower appliance body wire out of contact with the lingual of the anterior teeth, incisors are prevented from “dumping forward.” This prevents gingival stripping and damage to the labial supporting tissues as the anterior arch width is gained. As arch development continues the lip bumper can be removed and a crossover spring is then added to the lower appliance to correct the dental shift (Fig. 11). The crossover spring
is soldered to the left side of the body wire and extends to the distal of the right lateral. As the omega loop opens to widen laterally, the crossover spring brings the deviated segment toward the centerline. 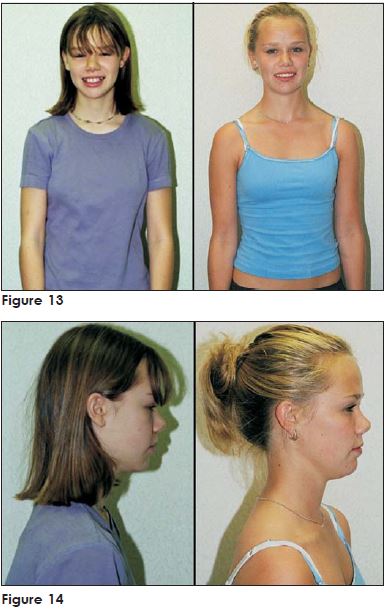 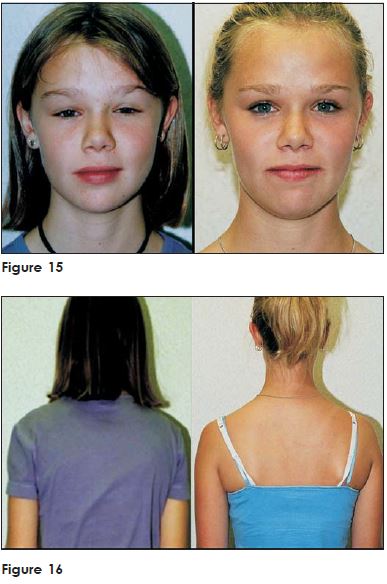 In order to correct the occlusal cant, another adaptation is made to the lower A.L.F. An occlusal pad constructed of orthodontic acrylic is added over the right lower first permanent molar. A buccal arm extension formed with an elastic attachment is also soldered to the molar crib (Fig. 11). The elastic
attaches from the anterior hook of the buccal arm to the upper first molar. This design facilitates uprighting the lower first molar and allows the second molar and the bicuspids to erupt occlusally. Elevating the mandibular occlusion on the side the maxilla is low (right side) also brings about levelling of the maxillary plane. The maxilla and sphenoid complex rotate around an a-p axis, causing levelling of the occlusal and ocular planes.
A vertical elastic (Fig. 11) is worn on the opposite side (left). This limits buccal flaring of the externally rotated left side as well as encourages the high side of the maxilla to come down.

Once the occlusal plane is levelled and arch development completed, then minor tooth rotations and spacing are corrected using straight wire fixed
orthodontic technique for detailing the occlusion.

Figure 12 shows the finished dental result. Upper and lower A.L.F. retainers were worn for six months following active therapy. Active treatment time was 18 months in A.L.F. and 14 months in straight wire. In particular, the improvements in facial and postural symmetry (Fig. 13) should be noted. In the lateral view photograph the facial profile is straight. The forward head posture is resolved (Fig. 14). From the frontal view, there has been levelling of the eyes, nasal base and lip angulation (Fig. 15). The rear view shows levelling of the shoulders and the scapulae (Fig.16).

Although this was a mild malocclusion from a dental standpoint, the patient illustrates the importance of recognizing and treating the cranial
strain present, in this case a left torsion. The symptoms of headache, tinnitus, back pain and jaw pain were resolved over the course of treatment. Jaw mobility was restored to normal function. Four adjustments provided by an osteopathic physician at intervals throughout the course of treatment facilitated correction of the patient’s pelvic imbalance. This case demonstrates the importance of taking all diagnostic factors into consideration and including what underlies the dental problem. 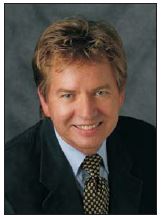 Dr. Strokon is a general dentist in South Surrey B.C., Canada. He received his degree from the University of Western Ontario in 1972. For the last twenty-five years he has taken an interest in treating symptomatic patients using both restorative and orthodontic techniques in his practice. He uses ALF therapy and cranial principles in most orthodontic cases and continues to develop treatment protocols for correction of cranial-based problems. Dr. Strokon gives seminars on the philosophy, treatment concepts and design of ALF appliances. 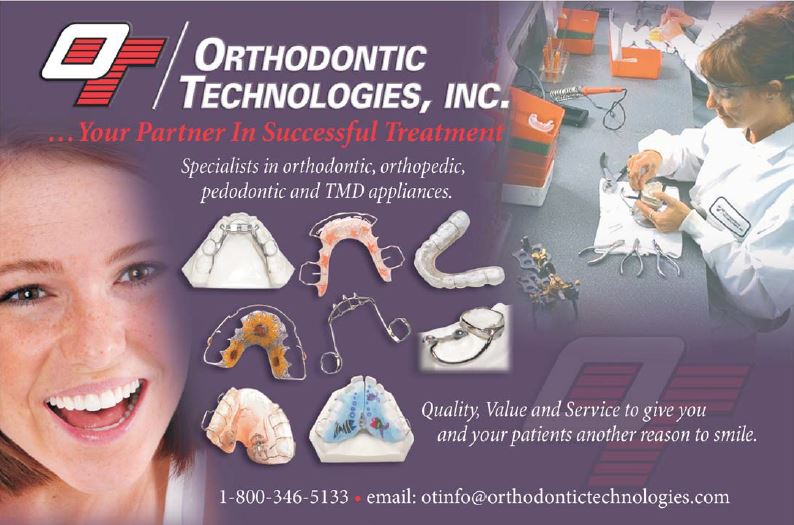 THE CO-FOUNDERS OF TOTAL HEALTH

The co-founders of the Total Health Conference are: Dr Dittmar Eichhoff – general dentist based in Grahamstown specializing in airway dentistry; Dr Jacques Smit – a dentist in Cape Town with an interest in breathing and facial development; and Gary Hockly – Cape Town based dental lab technician and local businessman.

8:30am – 9:30am Orthotropics made simple and the Future of Orthodontics – (Mew) LIVE